The 2021 Stanley Cup Playoffs are about to enter the Conferences. Find updated odds and predictions on who will win the Stanley Cup here.

Like the weather outside in Canada, the Stanley Cup Playoffs are heating up. We are about to enter these unique Conferences Finals. As there are no Conferences this year, three teams from the East and one from the West will duke it out for two more rounds for a chance at the Stanley Cup. Find the best NHL Stanley Cup odds and predictions into the Conference Finals now!

When the NHL Playoffs started in May, the Lightning was among the favourites to win the Stanley Cup. However, as we enter the Conference Finals, they have cemented themselves as the best team and bet to repeat as Stanley Cup Champions.

The return of Nikita Kucherov to the lineup – using an interesting loophole in the NHL salary cap – has been a gamechanger for Tampa Bay. While any hockey fan knows the former Hart Trophy winner is one of the best players in the league, what he is doing through two rounds was unexpected.

After not playing a single game during the regular season, Kucherov returned to the lineup looking as good, if not better, than his MVP form from 2019.

Through 11 games, Kucherov has 18 points, with 13 coming on the power play. If he keeps up his pace over the next two rounds of the postseason, he could top Evgeni Malkin 36 points in 2009 – the most points in the playoffs since 1993. Kucherov is not the only reason the Tampa Bay Lightning can win the Stanley Cup.

Goaltender Andrei Vasilevskiy is having another excellent postseason. Vasilevskiy is following up his 2020 playoffs – a .927 save percentage and 1.90 GAA – with even better numbers. He has improved his save percentage to .934 and has notched twice as many shutouts (two versus one) with two more rounds to go.

Can the Montreal Canadiens end the Canadian Stanley Cup Drought?

It was 1993, the last time a Canadian franchise hoisted the Stanley Cup. Since then, four Canadian teams have made the Stanley Cup Finals but now have been able to bring Lord Stanley to the North. At the start of the 2021 Stanley Cup Playoffs, hockey betting odds had the Canadiens tied with the Nashville Predators for the worst odds to win the Cup.

Since the oddsmaker made the Canadiens the biggest underdog at the start of the playoffs, the unexpected has happened. It is not just that the Canadiens who have won two straight series, it is how they are winning. Since being down 3-1 in their First Round series against the Toronto Maple Leafs, the Canadiens have gone on a historically run.

The Canadiens have won their last seven games, which is impressive. What is more amazing is since the start of game five against the Maple Leafs, the Canadiens have not trailed in a game. That is a stretch of 437 minutes and 53 seconds. The only team in the history of, not only the NHL but each of the Big Four leagues, to have a longer streak is the 1960 Canadiens. 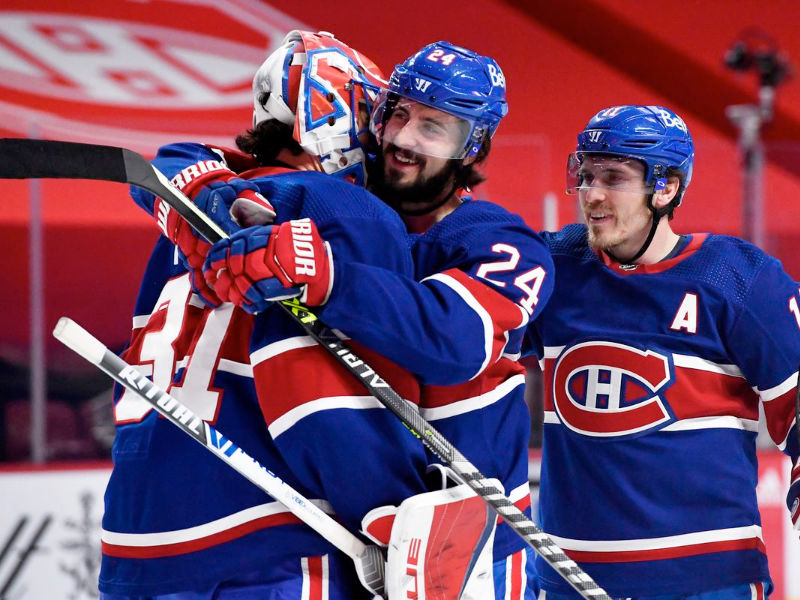 Things are about to get more challenging for the Canadiens – as they will face the winner of the Vegas Golden Knights – Colorado Avalanche series. But few, if any, outside the Montreal fanbase thought they would beat Toronto and maybe fewer pegged them to sweep the Winnipeg Jets.

It will be on the back of Carey Price to carry the Montreal Canadiens to a Stanley Cup title. Price is playing outstanding this postseason. He owns the best save percentage of any goaltender at .935 (as of June 9). Price’s run this postseason is reminiscent of Jonathan Quick and the Los Angeles Kings in 2012.

The Kings entered the postseason as significant underdogs. They squeaked into the postseason as the eighth seed and drew the Vancouver Canucks (2012 President Trophy winner). But once the puck dropped against the Canucks, Jonathan Quick got hot – and stayed hot. Quick put together arguably the greatest goaltending postseason in NHL history. He finished the playoffs 1.41 GAA, guiding the Kings to a  16-4 record and their first Stanley Cup Championship.

Quick proved it in 2012, and Price is showing the same signs in 2021. It will be an arduous journey for the Canadiens, but if they continue to get some production from Tyler Toffoli, Nicolas Suzuki, and Joel Amaria and Price stays hot, they can win the Cup.

Do you go with one of the Lightning’s best players? Do you roll with the hottest goaltender in the postseason and bet Price? Or do you hedge your bets and take one of the favourites from another team? This is the question we need to answer.

We are going with the best Tampa Bay Lightning player – Nikita Kucherov, to win the Conn Smythe Trophy. Kucherov has a chance to become only the third player in NHL history to score 40 points in a postseason – joining Wayne Gretzky (three times) and Mario Lemieux. The elusive company he would join with those numbers is too astronautical for voters to ignore.

Best Online Sportsbooks to Bet on the Stanley Cup Playoffs 2021

Find NHL futures and odds on every NHL game at the online sportsbooks below. They are offering elusive welcome bonuses to new users who sign up through the links underneath. Join today and bet on the NHL.