The MLB enters the second half of the season, with plenty of teams in the mix for the postseason. With so much up in the air, it is a great time to check out some second-half Major League Baseball futures and picks.

AFTER AN EXCITING MLB ALL-STAR WEEK, the MLB moves into the second half of the season – that saw Vladimir Guerrero Jr. take home the game’s MVP. With the festivities behind us, it is back to business for the 30 MLB teams, with plenty of games left and little decided. Get ready for the summer stretch with our MLB Futures and best bets for the second half of the season below.

Can the Toronto Blue Jays win the World Series?

The Toronto Blue Jays stormed into the second half of the 2021 MLB Season – sweeping the Texas Rangers and outscoring them 25-2. The Blue Jays offence is as dangerous as any in the league. Vladimir Guerrero Jr. would be the favourite to win AL MVP if not for a certain player down in Anaheim. Bo Bichette is on pace for 30 home runs, and the rest of the line-up could feature four other guys topping 20 home runs this season.

The starting pitching for the Jays has been solid this season – with ace Hyun Jin Ryu along with Robbie Ray having stellar seasons. Steven Matz also got back on track, pitching five scoreless against the Rangers.

The Jays are likely to be buyers at the deadline – to add some depth to the bullpen (their biggest flaw this season). If they can add a solid seventh/eighth-inning guy to help their closer Jordan Romano, this team can compete with anyone.

The NL West is the Most Interesting Race in Baseball

If you thought the San Francisco Giants would have the best record in baseball on July 18th, raise your hand. Unless you are from the Bay Area and your hand is up, you are lying. With the Giants having such a great season, the NL West has turned into the race to watch this season.

The Los Angeles Dodgers have dominated the NL West, winning the division every year since 2013. With the Giants surging and the San Diego Padres a threat, the Dodgers streak may end. The Dodgers have a big problem right now – Trevor Bauer. Bauer, once an ace in the league, is currently under investigation for sexual assault. Between the outside distractions and the loss of a starting pitcher, the Dodgers are vulnerable. 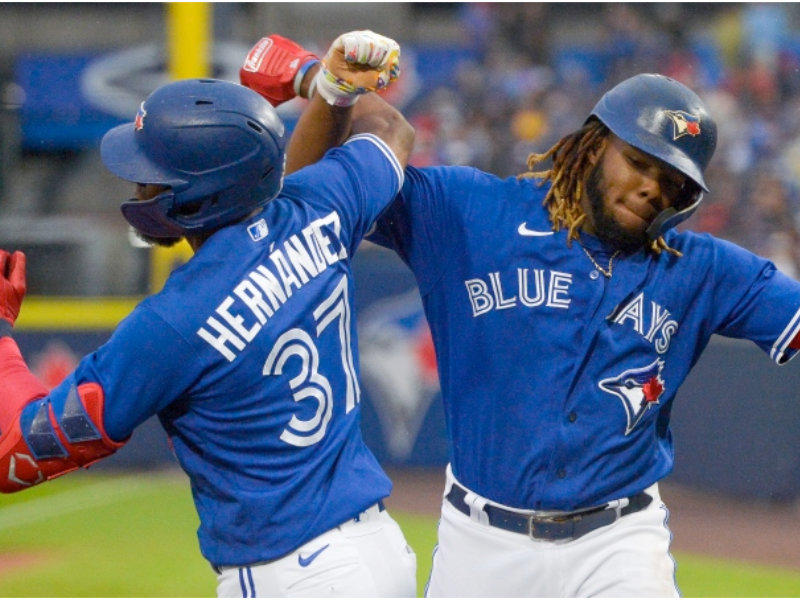 Between the Giants and Padres, we are leaning towards the Padres to win the division. The Padres have arguably the best player in the NL this season – Fernando Tatis Jr. Tatis is proving he was worth the massive extensive he signed. Jake Cronenworth is also having a stellar campaign – with 100 hits in 93 games, including 21 home runs.

Starting pitching has been a bit up and down for Padres – but with a promising bullpen session from Yu Darvish and Blake Snell allowing no runs in two of his last three starts is a positive. If they can get quality starts out of those two, and Joe Musgrove continues to have a sub 3.00 ERA, the bullpen is strong enough to close out games and help the Padres win the NL West.

The Cincinnati Reds were one of the teams that benefitted from the expanded postseason last year – making it at 31-29 to be promptly swept by the Atlanta Braves. At the start of the season, most people viewed the Reds as a bottom of the standings team, likely failing to win 80 games for the seventh straight season.

However, thanks to an 8-2 stretch before the MLB All-Star Game, the Reds are in the mix to win the NL Central for only the third time since 1996.

The key for the Reds is production from one to nine in the line-up. Nick Castellanos is having a career year – batting .330. Joey Votto should improve in the second half of the season, and Wade Miley is having a career resurgence.

Obviously, getting swept by the Brewers tempers some expectations – but not enough for us to rule out the Reds having another surge and challenging the NL Central crown.

Are Mike Trout and Shohei Ohtani Enough to End the Angels Postseason Drought?

You would think having the best baseball player of the last decade – Mike Trout – would make the Los Angeles Angels a perennial contender. However, that has not been the case, as the Angels (including last year’s expanded MLB Playoffs format) have missed the postseason for six straight years.

The Angels now have another piece to put beside Mike Trout – Shohei Ohtani. Ohtani has been the talk of baseball all season – and is the favourite to win the AL MVP. The one-two punch is arguably the most dangerous in baseball this season.

If the team makes a move at the deadline to acquire some more pitching, they could move up the AL West standings and nab a Wild Card spot. Once in the postseason, facing Trout and Ohtani for a series is something no team wants to do.

Find the best online sportsbooks to bet on the MLB below. New users can grab an exclusive welcome bonus they can use to bet on the Blue Jays and every other MLB team through the season.

Get ready for the Men’s and Women’s tournament at the 2021 Summer Games with our soccer betting predictions.