Mike Tyson and Lennox Lewis are finalizing a heavyweight rematch for this September. Find early odds and our predictions on the fight here.

Nearly 20 years after their historic first fight, Lennox Lewis and Mike Tyson appear ready to go at it again – as they are in the process of finalizing an exhibition fight for September. Betting odds are available, which you can find in our Mike Tyson vs Lennox Lewis Betting Preview, along with the crazy history of their first fight and our prediction on the rematch.

Recap of Their First Fight

The first fight between Mike Tyson and Lennox Lewis – remains one of the biggest and most entertaining in boxing history. The lasting memory for many is not the fight but what preceded it. At a press conference in January 2002-  a full-out melee ensued – with both camps getting involved and at one point during the brawl – Mike Tyson bit Lennox Lewis in the leg.

WBC president Jose Sulaiman sued the fighters for $56 million – alleging they knocked him unconscious. The result of the brawl postponed the fight and changed the venue – as Nevada refused to grant Mike Tyson a license after the brawl and exploitive tirade that followed (along with other unresolved issues).

The fight went down on June 8, 2002, in Memphis, Tennessee. Dozens of celebrities and professional athletes were in attendance for the fight – including Michael Jordan, The Rock, Samuel L. Jackson, and Tom Cruise. The fight also set records for the highest-grossing pay-per-view of all-time (since surpassed).

The fight started evenly, but by the fourth round, Mike Tyson was visibly tired and bleeding, at which point Lewis took control. The fight went on until Lennox Lewis knocked Tyson down for a second time in the eighth round. Tyson lay on the mat and was counted out. Despite the insanely at the press conference, the fight went off with little to no issues – just a few warnings for pushing, holding and a headbutt.

It was the penultimate fight of Lewis’s career, while Tyson would only enter the ring as a professional three more times. 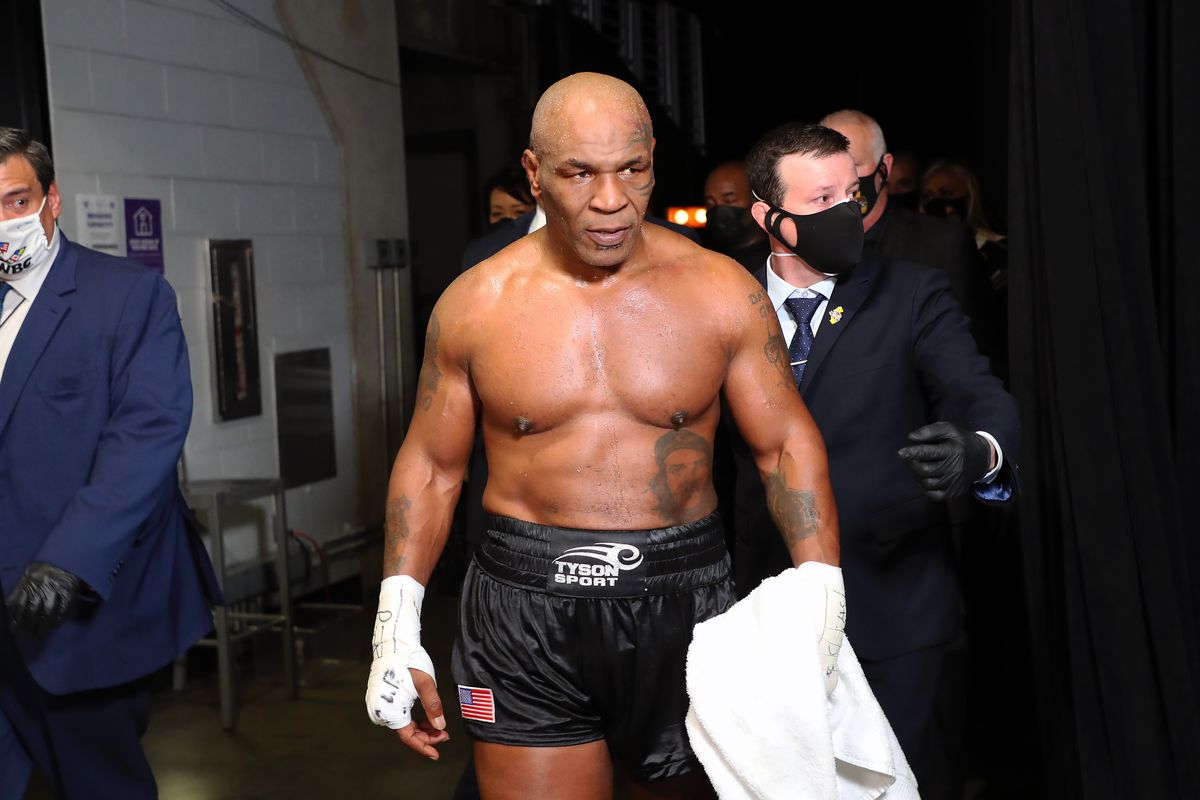 Mike Tyson and Lennox Lewis are negotiating the final details of a rematch – currently slated for September. While this is considered an exhibition match – after watching Mike Tyson take on Roy Jones Jr., expectations for these fights have risen substantially (especially if you remember the debacle that was Mike Tyson’s World Tour in 2006).

Although Lewis won, no dominated Tyson in the first match – Lewis has not boxed since he beat Vitali Klitschko in June 2003 (retiring shortly afterwards). While Lewis has done many great things over the last 19 years – few, if any, helped keep his boxing skills sharp.

Tyson – coming off a draw against Roy Jones Jr. in November – looks the part of a heavyweight contender. Between the training videos posted in 2020 to his agile and powerful performance against Jones Jr. – Tyson looks like he could hang with current heavyweights.

Early odds on the fight from Bodog have Mike Tyson as the favourite. When the two fought in 2002 – Lennox Lewis was the favourite at 1.50, while Tyson was the underdog 2.75. At the time, Lewis was considered the better fighter and Tyson a loose canon nearing the end of his career.

Now Mike Tyson is much more stable and spending more much of his time training. Lewis is busy in his business and entrepreneurial ventures – with little details on his social media suggesting he is still boxing, even for exercise.

Lewis will still have the skills and IQ from his boxing career – however, without the training and conditioning, he is rightfully the underdog against Tyson.

Our early prediction on the fight is Mike Tyson exacts his revenge on Lewis and wins the fight.

The biggest boxing betting prop on this fight will be if either fighter wins by knockout. However, until they announce the state and venue, this prop remains unavailable. Why?

Because this is an exhibition fight – not a professional bout – and the rules governing the fight are different. For example, the Roy Jones Jr. – Mike Tyson bout in November had a “no knockout clause.” The clause changed the weight of the gloves, the length of the fight and gave the referee more power to stop the fight.

Until the full details of the fight immerse, these prop markets will be closed for betting. Expect more information to immerge as negotiations continue throughout May and June.

Best Online Sportsbooks to Bet on Lewis vs. Tyson

Enjoy betting on the Mike Tyson – Lennox Lewis boxing match by joining one of the online sportsbooks listed below. They know that Canadian bettors love seeing legends of the ring square off – even if it is only an exhibition match – and offer great odds and plenty of markets (with most opening closer to the date). Join through the links below to grab a welcome bonus you can use to bet on this fight and others, such as Logan Paul vs. Floyd Mayweather in June.

Our Most Visited Pages