With the Canadian Football League regular season just around the corner, now is the time to check out some 2018 Grey Cup and division futures available on the top-rated Canadian sportsbooks. Last year, the Toronto Argonauts shocked the CFL community by winning the 2017 Grey Cup. This year, just about every team has a chance at winning the Grey Cup, but the safest money is on a West Division team to capture the title in 2018.

Before jumping into predicting division winner and 2018 Grey Cup futures, now is an excellent team to check in on some of the biggest stories entering the season.

No story entering the season is drawing as much attention as the Hamilton Tiger-Cats recent signing of former Heisman winning quarterback Johnny Manziel. While Johnny Manziel is expected to start the season as the backup, if he can recapture his electrifying play from his college days, it will not be easy keeping him on the bench.

Whether he is traded midseason, elevated to the role of starter or cut from the team remains to be seen. However, as long as he holds an active roster spot in the CFL, his presence will draw more eyes (including from the United States) and could help grow the game.

Can the Toronto Argonauts Repeat?

Last year at this time, the Toronto Argonauts were sitting at the bottom of the Grey Cup futures. Most fans agreed it was a rebuilding year for the franchise. However, with some excellent coaching, management and quarterback play, the Argos shocked the CFL by winning their 17th Grey Cup.

For the most part, the Argos are bringing back the core of their championship team. Ricky Ray will continue to helm the Argonauts offence, while other stars such as defensive back Cassius Vaughan and wide receivers S.J. Green return as well. Will it be enough to return to the Grey Cup? It is possible, although the Argos need luck on their side again in 2018.

The Battle for the Bottom

Entering the season, it seems on paper the worst two teams in the CFL are the B.C. Lions and Montreal Alouettes. The Lions had a 20-year playoff streak snapped last season, finishing at the bottom of the Western Division for the first time since 1996.

While the Lions are bringing their weakest roster into a season in the last two decades, they appear to have it better than the woeful Montreal Alouettes. Montreal finished last in the CFL in 2017, winning just three games (their lowest total since 1982 when they were the Montreal Concords). Poor quarterback play continues to plague the franchise in the post-Anthony Calvillo era. Overall the Alouettes and the Lions are the two teams to avoid betting on early in the season.

The fact the recent winners of the East have done so with so few wins opens the doors for almost any team to win. Outside of Montreal, any team in the East could capture the top spot in 2018. The Hamilton Tiger-Cats enter the season as the favourites, followed closely by the Toronto Argonauts.

The quarterback situation could hinder Hamilton this season. While they have the best all-around roster in the East, not having a clear number one signal caller entering the season could derail Hamilton. A mid-season switch could save Hamilton and help them make the playoffs. However, if they need to move to Johnny Manziel, it could be too late for Hamilton to win the East.

This means the race for top spot will likely come down to the Toronto Argonauts and the Ottawa Redblacks. Toronto enters the year as the reigning Grey Cup champions. They greatly exceeded expectations in 2017 due to some stellar play from Ricky Ray. The problem for Toronto is Ricky Ray will turn 39 this season. Although Ray managed to play 17 games last season, he had missed at least seven games in three of the previous four seasons.

Then there is Ottawa, the best team to bet will win the East. Ottawa won the East Division in 2015 and 2016 (their second and third years of existence). They nearly missed out on their third straight division title, finishing half a game behind Toronto in 2017.

Ottawa went through a bit of a translational phase last year after Henry Burris retired. After starting the year 1-6-1, Ottawa went on to go 7-3 down the stretch. They should continue where they left off last season (and avoid a slow start), which should be enough to win the East.

Unlike the East Division, winning the West Division should take between 13 and 15 wins (the number of wins each of the last six division winners has finished between).

Calgary opens the season as the favourites to win the West. It has been a long run of excellence for the Calgary Stampeders, the West Division winner in four of the last five seasons. However, with some stiff competition, Calgary could secede from the throne in 2018. Edmonton, Saskatchewan and Winnipeg all sit tied for the second-best odds of winning the West.

Time does take a toll in football. After 20 games per season over the last six years, the Calgary's roster will likely show some signs of wear and tear. The Stampeders will remain competitive and are all but a lock to make the postseason (as the West should send four teams again in 2018). However, they could slip down to second or third in the division this season.

Of the three other teams with a good chance at winning the West (apologies to BC Lions fans, but they are the weakest team entering the season), the best bet to win the West is the Winnipeg Blue Bombers. Winnipeg finished runner-up in the West last season, while leading the CFL with 554 points scored. Their head coach, former CFL linebacker Mike O’Shea, is spending his time this offseason improving the team’s defence.

The Edmonton Eskimos and Saskatchewan Roughriders should both be competitive in 2018. However, Edmonton is too streaky of a team to bet confidently on, while Saskatchewan is starting a new quarterback in 2018 and could start the season a little sloppy.

While it has never happened in the 20+ seasons since the CFL has implemented the crossover rule (West vs. East playoff game), a West vs. West Grey Cup Finals may be the best outcome to wager on in 2018. While the East has won the last two Grey Cup, the Canadian Football League continues to field better teams in the West. Four teams in the West last season finished with a better record than the Toronto Argonauts who led the East.

Calgary is the favourite, but after three straight seasons ending in disappointment, betting on them to win the Grey Cup this year at just +220 is not worth it, especially considering the odds on every other team in the West Division. 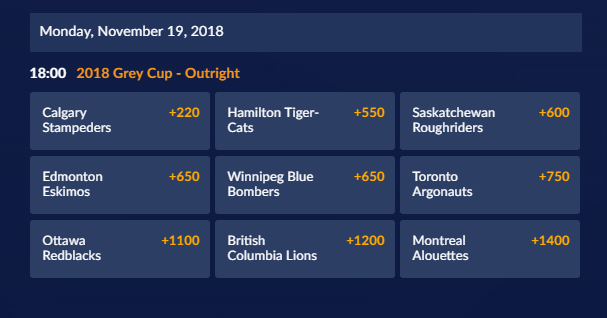 The question that remains is what West Division teams offer the best odds on football sportsbooks. If they can get to the game, Edmonton would have the benefit of home-field advantage. The last three teams to play a Grey Cup at home, all won the game. Edmonton’s problem is they likely have the hardest path to the Grey Cup. They look to be the third or fourth place team in the West Division, meaning some tough road playoff games.

Saskatchewan has a great defence, but changes at quarterback could slow their offence in 2018. The CFL is a veteran quarterback league. While some players do find early success, the majority of MOP and Grey Cup-winning quarterbacks have more experience than Brandon Bridge, who has attempted just 191 passes in his CFL career.

That leaves the Winnipeg Blue Bombers. Helmed by a quarterback Matt Nichols, the Blue Bombers have shown continual improvement over the last two seasons, and look ready to end the CFL’s longest active Grey Cup drought. They have added depth at wide receiver, opening up more big-play potential while simultaneously helping Matt Nichols take another step forward in 2018.

They also made some good moves on the defensive side of the ball. After tying for the most passing touchdowns allowed last season (33) and allowing the most passing yards, the Blue Bombers added some strong talent in the secondary. Overall, no team in the CFL is offering up better Grey Cup futures than the Winnipeg Blue Bombers

The 2022 Champions League Final is going to take place on Saturday. Come check out our best bets for the prestigious event.

The 2022 Stanley Cup Playoffs are fully underway. Check out our best bet for the future winner.

The long-awaited fight between Blachowicz and Rakic will take place at the UFC Apex in Enterprise, Nevada.

The 2022 NFL season is going to be here before we know it, meaning bettors should start getting some bets in for teams that have a good chance to make the NFL playoffs with great odds.

Our Most Visited Pages