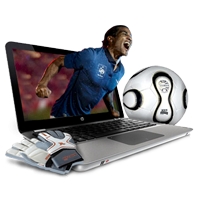 Arguably a more Beautiful Game, on the North American side of the pond recently, Major League Soccer is the highest level of competition in both Canada and the USA. Gaining a stronger foothold on the sports wagering landscape, while adding more fans every year, North America’s premier soccer organization now boasts 20 teams that compete in two conferences. As is the case with the vast number of European Football leagues, our recommended sportsbooks offer comprehensive soccer betting lines through MLS season. [+]

That’s certainly the case with the Canadian based squads that play out of Montreal, Toronto and Vancouver. Check out the odds for the Impact, Toronto FC and the Whitecaps, or any MLS squad, at the top rated soccer betting sites listed below.

What are your odds of choice? Game totals, first and second half lines, outright winners or do you like to spread wager? Get all those soccer betting lines today and everyday at our top sportsbooks.

Sportsbook Bonus To Bet On Soccer

It’s always good to have a little jingle in your jeans for the Major League Soccer season. Register a sports betting account and then transfer that cash to your bankroll. Don’t forget to collect a valuable sportsbook bonus to bet on soccer when you fund your account. The entire process is quick and easy, in a safe and secure environment, at these world-class online sportsbooks.

Count yours truly in the crowd that’s impressed by the growth of Major League Soccer. While they did make a major splash, during their first season in the United States back in 1996, the MLS did so with just ten teams in the fold. That inaugural season was played without a Canadian based squad in the mix. Fast-forward two decades, and after a few peaks and valleys, three cities in Canada are now home to an MLS Crews and the league has doubled to twenty squads in total. MLS teams play an action packed 34-game regular season schedule that runs from March until October.

MLS soccer is the perfect cure for NFL withdrawal once the Super Bowl plays out in early February. Take stock of the football season past and then start reading up on the soccer fixtures that are about to begin. Along with the rivalries Canuck teams share, matchups like the Seattle Sounders vs Portland Timbers, New York FC vs. D.C. United and the LA Galaxy against basically everyone, keep soccer betting front and center during all 34 weeks of the MLS season. Pregame or in-game, live soccer wagering action is always available at the top rated online sportsbooks posted above.