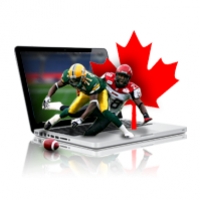 Carving out its niche in the pro sports landscape, over a long time period in the Great White North, the Canadian Football League is part of the fabric in the tapestry that makes up Canada. With teams strategically placed across the country, and games throughout week, it’s easy to get in on the exciting action that CFL betting lines offer. A short but competitive two game preseason is followed by 20 weeks of gridiron action from June through November. Get in the game with “bigger balls” at any of our top rated sports wagering sites.

Some may look past the CFL - to the hype machine that is the NFL. However, when it’s the only game in town during the summer months, a lot more than ever before, bettors are getting in on CFL betting lines today with the real time odds offered by our top rated online sportsbooks.

Without much of a talent disparity, no matter where a team sits in the CFL standings, even a first vs worst matchup can often turn into an exciting contest. Stick with us here at Canadian Sportsbooks to track your betting favorites as we update the CFL rankings throughout the 20-week season.

As the second oldest pro sports championship trophy in North America, behind the legendary NHL Stanley Cup, the Grey Cup is the mark of football supremacy in Canada. With roots that stretch back to 1909, when the Varsity Blues defeated the Parkdale Canoe Club 26-6 at Rosedale Field, the CFL has handed out the Grey Cup trophy 103 times. That number is up to the 2015 season when the Edmonton Eskimos captured their 14th CFL Championship with a victory over the Ottawa Redblacks who were playing in their franchise first CFL title game. Bet on the pregame odds and prop options, or you can jump on the LIVE wagering action at our recommended sportsbooks.

Being as the CFL is a nine-team league, that we wish would jump to ten, rivalries are plentiful in the Canadian game. Whether it’s the Battle of Alberta, when Edmonton visits Calgary for the Labour Day Classic, or Hamilton facing Toronto during their fights for Ontario, ample information is always available to bettors as they research their CFL picks. Top rated sportsbooks even lay out easy to understand team statistics in game center capsules at their websites. Register an account, make a safe and secure deposit, collect a valuable sportsbook bonus reward, and get in on CFL betting excitement all the way up to the Grey Cup. Canuck pigskin prognosticating is awesome eh.