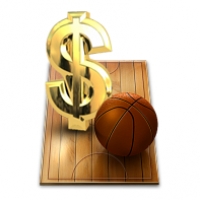 Basketball started to grow in popularity the moment that James Naismith cut out the bottom of a basket to let the ball fall through, making it easier for the game to resume after a successful shot. Since then, the sport has spread throughout the world, becoming one of the most loved pastimes in the world. Plenty of fans wager on the NBA and FIBA, which makes these lines some of the most debated odds on the finest online sportsbooks we have sorted out for you.

Basketball betting lines today may be different from yesterday because of many different factors. The information provided below gives you an update on the latest developments in terms of odds and team performance.

Sportsbook Bonus To Bet On Basketball

When you want to make a wager on the latest basketball betting lines, one of the easiest methods to do so is through an online sportsbook. We list only the most trusted in the industry, also providing the type of bonus they offer.

How To Bet On Basketball ?

In terms of international play, the results tend to be dominated by teams from the United States, with the rare challenge offered by teams from Puerto Rico, Spain, Argentina and eastern European countries. However, as the popularity of the NBA continues to grow worldwide, more teams outside of the United States will be able to compete against the favorites at the highest level. [+]

The NBA also tends to be relatively predictable, with a handful of star players and coaches hoarding most of the championships over the past few decades. Typically, one dynasty tends to lead to the next, including Jordan’s Bulls, Duncan’s Spurs and Kobe’s Lakers, which have collective won more than half the championships since 1991.

As the league moves towards a small ball style of play, the new dominant teams appear to be the ones who are able to mesh into a seamless two-way machine, creating an opportunity for other franchises to rise.

The majority of bets placed on basketball involve picking the winner of the contest, which usually involves a moneyline. Favorites are listed at negative odds, such as -220, while underdogs have positive odds, such as +350. These numbers represent how much you win when wagering on one of these two teams. To win $100 betting on the favorite at -220, you need to wager $220, while a $100 bet on an underdog at +350 nets you a $350 win.